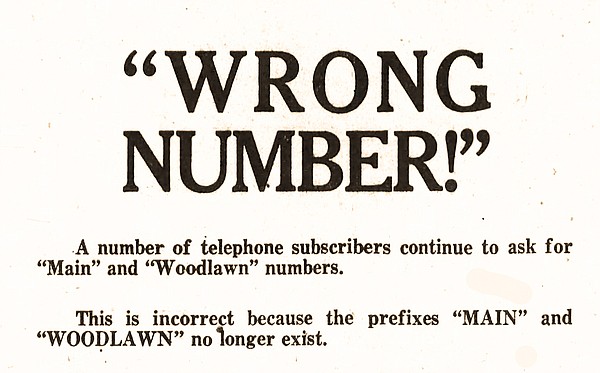 Big Smartphone blasts my emails, slamming over and over about all the little improvements it could make to my email life if only I hurriedly replaced my 3 year old phone.

The phone industry is all about upgrading whether customers want one or not.

Knowing this and being Arkansans, we can imagine how customers in Arkansas felt 100 years ago when Southwestern Bell Telephone Co. changed all telephone numbers in the city of Little Rock, overnight.

Telephones were nothing new in Arkansas back then, as historian Tom Dillard has explained rather well (see arkansasonline.com/613tom). The first Little Rock exchange had opened on November 1, 1879. This was three months before General Douglas MacArthur was born in the Little Rock arsenal and only four years after Alexander Graham Bell (1847-1922) invented the dang stuff.

In 1922, Southwestern Bell serviced 55,843 of the 175,333 telephones in the state…assuming I read a chart correctly and the chart is accurate (see chart 25 here: arkansasonline.com/613chart). Bell was tall.

Lines in a geographic area were organized into exchanges, which were groups of circuits that terminated on a large switchboard in a central office where a switch could connect that line to that line by flipping switches and plugging electrical cords into taken. Moving a crank or lever on his phone sent a signal that alerted the switchboard operator. The operator (always human and usually a woman) asked what number the subscriber wanted to call.

See a photo of a small switchboard from 1922 here: arkansasonline.com/613loc. Little Rock had great standards with lots of operators.

As the population grew, more exchanges were added. Each exchange had a name, and that exchange name was part of the subscriber’s phone number. There was the main exchange, for example. To inform the Arkansas Gazette society editor of a big party, a proud hostess asked the operator to call Miss Nell Cotnam at “Main 5080”.

Friend Reader already knows all of this, but Old News clings to the hope that a free youngster might mistakenly stumble into this column and become entangled in our diligent descriptions. Once captured, the young can be domesticated.

Back to 1922: Bell figured out how to replace some of his horde of human operators with efficient machines. Automatic switching stations required a new type of telephone; and therefore every customer would need a new phone.

The equipment was expensive and time-consuming to install, so Bell rolled out this massive upgrade in stages over the years. The first changes came to Little Rock in the summer of 1922.

First, Western Electric Co. workers spent about two months constructing a machine switchgear in the main exchange building at Seventh and Louisiana streets (see arkansasonline.com/613ray). As the “Western Electrics” got to work in March – and formed their own baseball team for weekend games – news reports and advertisements began to warn the public of Stage 2, which is expected to take place. late May/early June.

Everyone’s phone number would change. Once the new phone book arrived, callers had to use it to look up each number before trying to call – even though the calls were still made while talking to a human. Forget your memory. Your old phone number was obsolete, replaced by five digits.

These new numbers did not include the familiar Main and Woodlawn exchange designations. Instead, they started with a 3 or a 4. In addition, zeros were added until each phone number had all five digits.

So, to reach Miss Cotnam, the proud hostess had to ask the operator to call “4-5080”. And those numbers had to be pronounced correctly. It wasn’t “4-50-80”. Say each number. And those zeros were not “zero”. Zero was pronounced “oh”.

Unfortunately, the Gazette didn’t update the company’s page logo with Cotnam’s number until June 21. And in the meantime, Bell’s ads were growing increasingly impatient with an audience that was loath to give up asking for the Main and Woodlawn trades. No, said the many advertisements, Main and Woodlawn did not exist. Callers should stop asking for them.

On June 14, the Arkansas Democrat gave an extensive interview to SA Lane, Bell’s division manager for Arkansas. He complained that the new repertoire had been out long enough for people to adapt to it. The company did not censor people, he said, but:

“Our operators in Little Rock handle an average of 275 calls during peak hours. Our total number of calls per day will average 150,000. Therefore, it can easily be seen that when only about half of phone users call by the new designations, a certain amount of confusion must necessarily enter the service.”

On June 27, the uncensored operators stopped helping holdouts from Main and Woodlawn and replaced them with a “special” operator who told them to use the new directory.

By the telephone company,

Try to repeat it.

Also during this time, Bell was preparing Stage 3, which involved yet another new phone book containing another set of numbers due to go into effect on the night of August 19.

Bell has advised businesses not to print any phone numbers on their advertisements or letterheads until the new book arrives.

About 3,000 subscribers received new phones. These contraptions had something called a built-in “dial”. You have to forget about talking to human operators. You have to learn to be brave and risk the tip of your index finger to turn this dial.

The company assembled a team of 40 high school and college students and had them spend a week at a phone-changing school. The young men scattered across town, knocking on doors and teaching subscribers how to “dial” a phone. In homes still using the old phone, they left a card with written instructions.

A wonderfully confusing press release published by the July 30 Gazette explained how after the August 19 conversion, rotary dial telephone calls would be connected automatically through machines! The rest of town wasn’t totally bogged down in the past by their old-fashioned phones. When one of them tried to call one of the chosen 3,000, a human intervened to switch the line, although the customer could not speak to him.

For all local calls from an older phone to another older phone, customers could talk to the operator – as long as they pronounced their digits correctly.

I like to imagine that for a time in 1922 no one knew how to call anyone, but everyone knew what they wanted to call the telephone company.