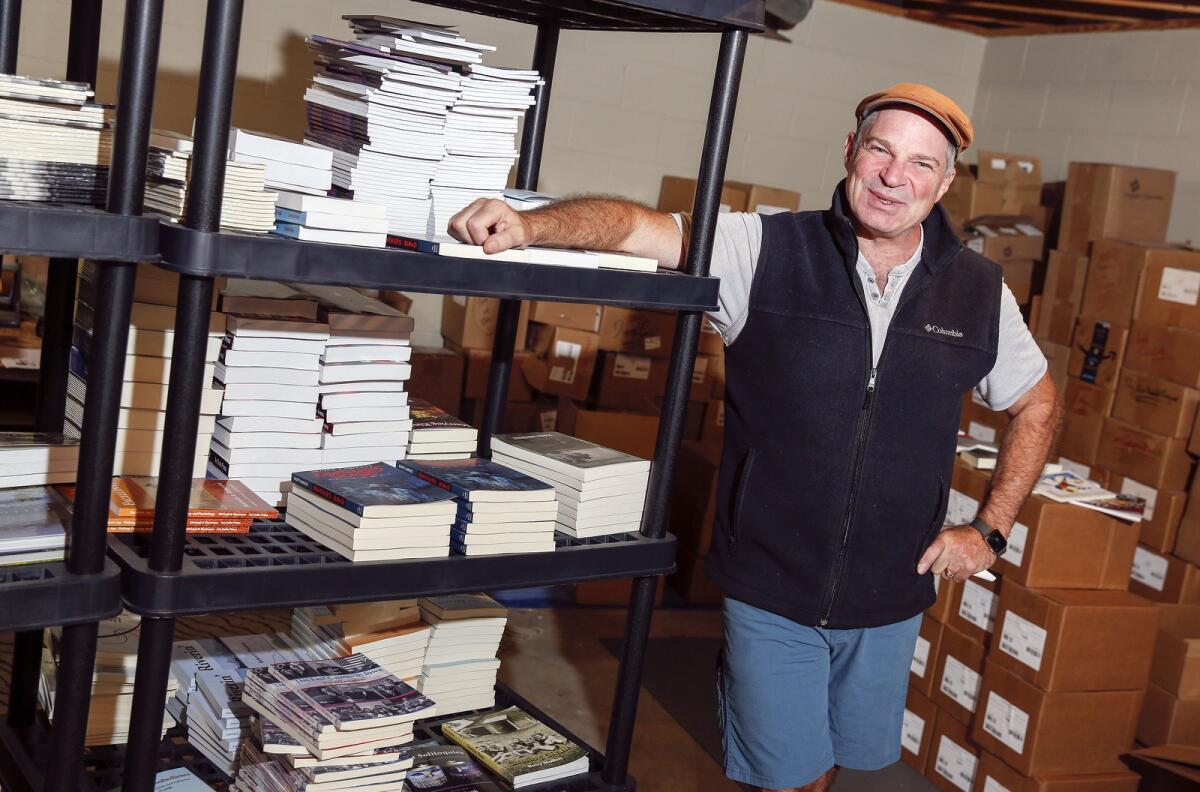 Steve Semken has been publishing books through his company Ice Cube Press for 30 years. (Jim Slosiarek / The Gazette)

The 30th year of Ice Cube Press kind of snuck up on its owner, Steve Semken.

â€œIt’s really weird to think about it,â€ Semken said one morning last week. “Who will give me my watch?” Oh, yeah, I have to do it myself.

Semken, 57, was in his mid-twenties with a degree in English and History from the University of Iowa when he became an editor.

â€œI was really jumping all over the place,â€ he said. â€œI worked at a cable company in Lawrence, Kan., And I never really knew what I was going to do. I was sort of on something every couple of months.

It didn’t matter the day job, when he came home from work, Semken wrote.

â€œI kept writing and writing, and I thought, ‘I really want to keep writing,â€ â€he said.

So in 1991, Semken published his own book as a chapbook, a small paperback of about 40 pages. About 18 months later, he launched a magazine, Sycamore Roots, which ran for about three years.

Steve Semken talks about some of the books he published through his publishing house Ice Cube Press for 30 years. Photographed in his stash / shipping area from his home in North Liberty, Iowa, Wednesday, October 13, 2021 (Jim Slosiarek / The Gazette)

â€œI called it the MFA (Master of Fine Arts) which I never had,â€ he said. â€œI wanted to be a famous New York Times bestselling writer, but I understood that would never happen.

â€œBut I discovered that I loved the layout of the newsletter. It was just learning to meet real writers and experience the reality of being a book publisher and an author, and that’s what I wanted to know.

Semken took a look at the Literary Marketplace, a directory for writers, publishers and booksellers, at the local library.

â€œIt was a bit like the Yellow Pages,â€ he recalls. â€œI would go home and write to these people.

â€œYou would find out who the writers you really liked were and how to get in touch with them. You really have to dig, and I still do it today.

Ice Cube’s first book in 1995 was â€œRiver Tips and Tree Trunks,â€ a collection of essays and short stories by Semken. He listed the book on an online site he had heard of – Amazon.com, then barely a year old.

In 1999, Semken was working with Humanities Iowa and the Iowa Arts Council on an annual speaking tour covering the state’s natural environment and resources, with an accompanying book.

â€œI was really overwhelmed,â€ he said. “I started to receive more submissions than I could accept.”

The part-time pursuit became full-time in 2001-02 when Semken resigned his last job as office manager for Lutheran Campus Ministry.

â€œI never really hated a job that I had,â€ he said. “I think part of the reason is I always knew I was going to do something like what I’m doing now.”

Ice Cube Press lists dozens of titles still in press, including some of its earliest. Changes in the printing industry allow shorter runs, allowing Semken to keep older titles in circulation.

â€œPrint on demand didn’t exist when I started,â€ he said. â€œAround 2001, I had a book that I thought was good, but there’s no way I’m selling so many of them. That’s at least half of what I do now: small runs and on-demand prints.

â€œThe ability to control how many books you are going to print at a time is just amazing. “

Ice Cube’s titles include a range of styles and genres, but its focus remains regional.

â€œMy mission is to use the literary arts to better understand how we can live better in the Midwest,â€ Semken said. â€œIt can be poetry, a biography, graphic novels, it is the works.

â€œI stray from it every now and then, but that’s the heart of what I do. There is a definite and incredible interest in this.

Semken remains its only full-time employee.

â€œI have readers who help me edit, and I have a salesperson who helps me in Chicago,â€ he said. “But everyone is just a commission.”

With titles on its schedule until 2023, Semken doesn’t care about finding new projects. He presents four or five â€œreally goodâ€ submissions each week.

â€œMore people trust you and I get better projects,â€ he said. â€œLucky for me, at this point, I can pick people whose books are pretty much ready to go, or close to. “

Last year’s COVID-19 shutdown may be a factor in further submissions.

â€œIt’s one of those weird things about the pandemic,â€ he said. â€œEveryone kept saying, ‘This must be a good time to read.’ What was happening was that everyone finally got a chance to write. It hasn’t slowed down much.

Semken never took out a business loan, and he never had a strict business plan, although he took management classes at the Tippie College of Business at the University of Iowa.

â€œI don’t have a state grant and I don’t have university funding, so it’s just me, with a rudimentary understanding of business in some ways,â€ he said. â€œBut in other ways it’s not rudimentary at all.

â€œI was amazed to see other literary businesses grow, and they just weren’t willing to ask people to buy things. What you need to do is find out what they are looking for.

And there are still many great books to be published.

â€œAt first I didn’t take people’s submissions as seriously as I should have,â€ Semken said. “Now that I realize how much time and energy goes into writing a book, after someone’s family, health, or job, the thing she sends me is usually the thing in which she put so much energy into. dream and their passion, and I began to realize that ….

“I really work with people’s passions and sincerity and dreams, and that kind of keeps me in my place.”

Do you know of a Corridor company that just might create an intriguing “My Biz” feature? let us know by emailing michaelchevy.castranova@thegazette.com.