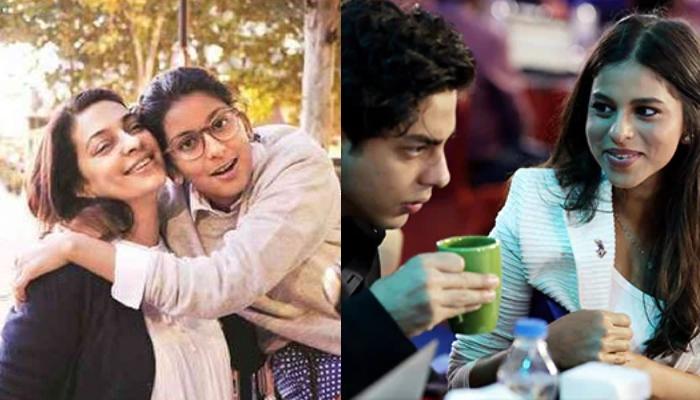 Juhi Chawla reacts to the fact that his daughter Jahnavi and Shah Rukh’s children, Suhana and Aryan, are the future of KKR

Bollywood actress, Juhi Chawla was married to businessman, Jay Mehta, in a secret wedding ceremony in 1996. The couple are blessed with two children, Arjun Mehta and Jahnavi Mehta . Juhi and Jay, along with Shah Rukh Khan, are proud owners of the IPL franchise, Kolkata Knight Riders (KKR). Every year SRK or Juhi attend IPL auction. However, for a few years their children, Aryan Khan and Jahnavi Mehta have taken over their duties, and they are successful. This year, Suhana Khan had also accompanied them.

Looks like Suhana Khan, Aryan Khan, and Jahnavi Mehta are all ready to take over their parents’ responsibilities in Team KKR! In February 2022, Shah Rukh Khan’s children Aryan and Suhana replaced him, while Juhi Chawla’s daughter Jahnavi replaced her in the 2022 Indian Premier League auction. Juhi posted a photo of Aryan, Suhana and Jahnavi from the auctions, and the proud mother captioned her post as follows:

Juhi Chawla’s daughter Jahnavi was seen taking part in this year’s IPL auction ceremony and was accompanied by Shah Rukh Khan’s children, Suhana Khan and Aryan Khan. The child stars had marked their attendance in place of their parents, Juhi and Shah Rukh, and portrayed themselves as the new faces of the Kolkata Knight Riders (KKR) at the IPL. In a recent chat with The Indian Express, Juhi Chawla explained how she felt watching her daughter Jahnavi fill her shoes. When asked if children could be labeled as the future of KKR, Juhi replied:

“Not just the future, they are the present of the team. It’s very funny how there was a time when our kids were at home and we would be on screen. Suddenly it was the other way around because I was at home watching my daughter on screen. It was beautiful. God bless her, Aryan and Suhana. I wish them all the best.”

In February 2022, Juhi Chawla took her IG handle and shared a video and a love note for her daughter, Jahnavi. The video included a slideshow of adorable photos of the mother-daughter duo from different time periods. Along with that, Juhi bared her heart in a touching caption, expressing how proud she was of her daughter. Recalling their trip to Bali when Jahnavi was just a little girl and showed immense interest in cricket, Juhi wrote:

“Ever since she was little, Jahnavi didn’t just watch IPL, she started watching cricket. By listening carefully to the commentators, she began to understand the intricacies of the game. When she was around 12, we were in Bali on a family vacation.At the hotel was a coffee table book, the size of (which was) a thick telephone book, remember those..??It contained stories of life, achievements, records, a sort of almanac, of all the cricketers in the world.. During the few days we spent at the hotel, between his jumps in the swimming pool and his mad hatter behavior , she sat at the gazebo by the pool and read this book cover to cover…!!! It was so unusual and so intense. What a 12 year old girl makes me wonder… ?”

Also read: Sonam Kapoor and her husband, Anand Ahuja announce their pregnancy, she looks surreal in a monokini

Later in the note, Juhi had shared how Jahnavi’s interest in cricket had grown over the years and added that her daughter had amazing knowledge about the world of cricket. The doting mum had revealed that Jahnavi was the youngest person to be allowed on the IPL auction table in 2019. She added:

“Over the years, her interest in the game has only increased. When talking about cricket, her face lights up, she is happy and enthusiastic. Her knowledge on the subject is amazing to me. Jahnavi has established some kind of record of being the youngest person allowed to participate in the IPL auction table 3 years ago, she was only 17. Aryan and Jahnavi attended the last auction, and this time Suhana them joined.

Earlier, in a chat with The Indian Express, Juhi Chawla talked about seeing children replace their parents in the IPL 2021 auction. She also mentioned that Jahnavi and Aryan follow cricket religiously and understand the game perfectly. on her reaction to seeing the children replace them, Juhi replied:

“A lot of little things come to my mind, one was, how amazing nature is! At a glance, Aryan looked like a young Shah Rukh and Jahnavi looked so much like me! I was so happy that the children have a keen interest in the team. They are not pressured to do so, they do it because they really want to. They both follow the sport with a passion. Jahnavi wakes up at odd hours of the night to watch cricket matches in different parts of the world.

Work-wise, Juhi will next be seen in the film, Sharmaji Namkeenwhich will be released on Amazon Prime Video on March 31, 2022.

Next Read: Kareena Kapoor Gets Trolled For Her Face Color, Fan Says ‘Why Your Face Likes Tomatoes’

AWESOME NEWS! Now you can download BollywoodShaadis app and never miss a story. Get the app

AWESOME NEWS! Now you can download BollywoodShaadis app and never miss a story. Choose your Android or IOS (Apple) device

How to write bash scripts in Linux