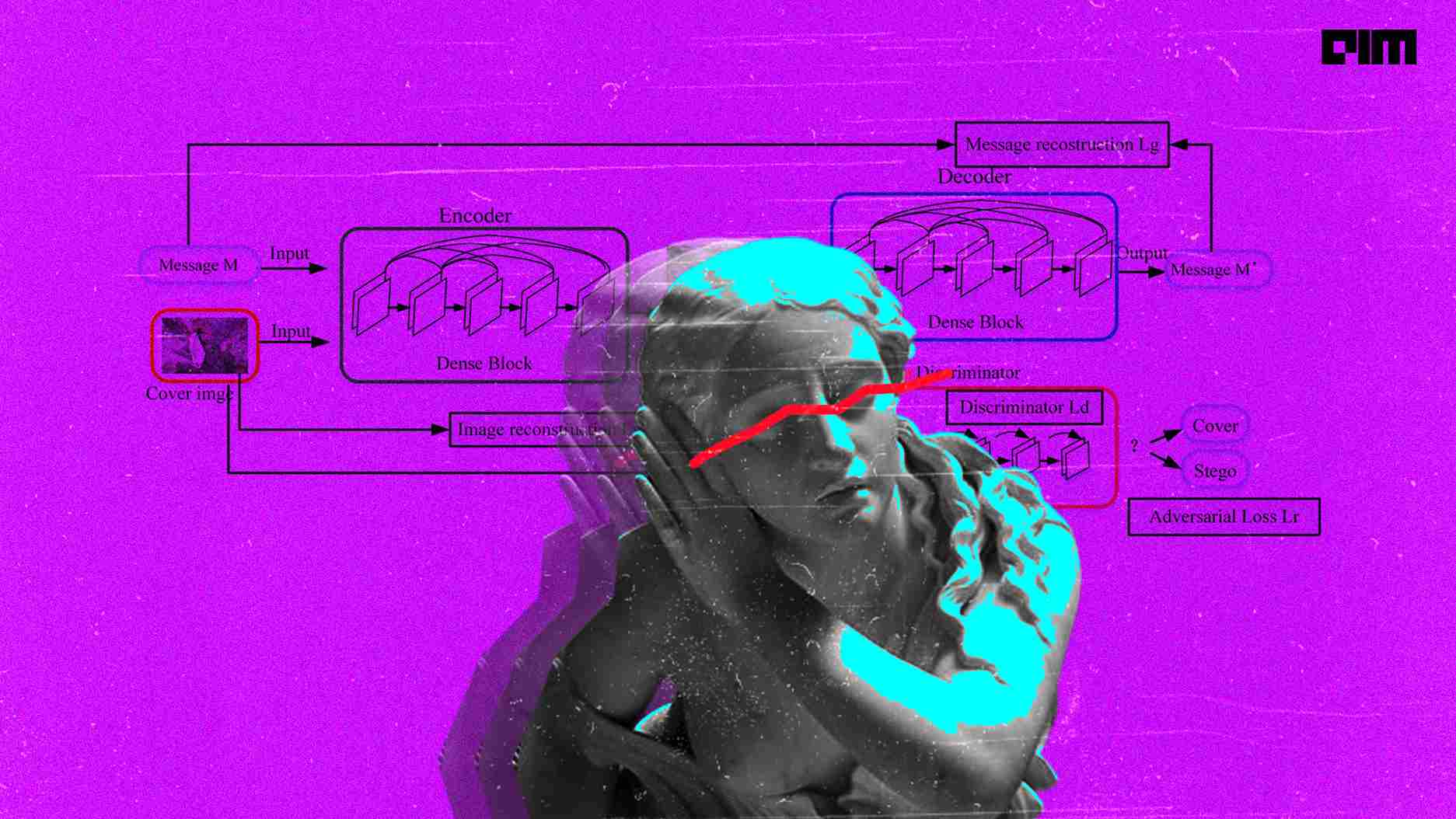 How to communicate secretly with SteganoGAN?

Steganography is the term used to refer to covert communication, which is hiding some kind of information in the main medium of communication. Deep learning is also used in this field to develop powerful and secure applications when communication is supposed to be through images. In this article, we will discuss about steganography and its current use with the latest developments. Later we will discuss the SteganoGAN which is a tool that does steganography on images. Here are the main points to be discussed in this article.

Steganography is the practice of concealing a secret message inside or even on top of something public. That something can be anything you want it to be. Many examples of steganography today involve embedding a piece of secret text inside an image. Alternatively, you can hide a secret message or script in a Word or Excel document.

The purpose of steganography is to conceal and deceive. It is a type of covert communication in which messages are concealed using any medium. It is not a type of cryptography as it does not involve the scrambling of data or the use of a key. Instead, it’s a type of data hiding that can be done in imaginative ways.

How is it done?

The data is encrypted or otherwise obfuscated before being injected into data that is part of a certain type of file, such as a JPEG image, audio or video file, using a special algorithm in today’s digital steganography . The hidden message can be inserted into ordinary data files in various ways.

One way is to disguise the data as bits that represent the same color pixels in the line of an image file. By discretely applying the encrypted data to the redundant data, the result is an image file that looks identical to the original image but contains “noise” patterns of normal unencrypted data.

A common application of steganography is the use of a watermark, which is a mark or other identifying data embedded in media files or other content files. Watermarking is a method used by Internet publishers to determine the origin of media assets that have been downloaded without permission.

A common application of steganography is the addition of a watermark – a mark or other identifying data concealed in media files or other content files. Watermarking is a technique commonly used by online publishers to identify the source of media assets discovered to be shared without permission.

Traditional image steganography techniques are only effective up to a relative payload of about 0.4 bits per pixel. They tend to introduce artifacts beyond this limit, which can be easily spotted by automated steganalysis techniques and, in severe circumstances, by the human eye.

STEGANOGAN is a revolutionary end-to-end model for image steganography that takes advantage of current developments in deep learning. It uses dense connections, which have been shown to improve performance by alleviating the leakage gradient problem.

Multiple loss functions are used in an adversarial training framework to simultaneously optimize the encoder, decoder, and critical networks. We find that our method successfully embeds arbitrary data into cover photos derived from a variety of natural landscapes and achieves peak embedding rates of 4.4 bits per pixel.

To use SteganoGAN, we need to install SteganoGAN via pip or via source by cloning the repository, and we also need to use a dataset to train the GAN. The dataset can be used from the repository. There is a shell file in the directory SteganoGAN/research/data/download.sh by running this file we can download the div2K dataset and MS COCO. Either of these datasets is required for training here. I used the div2k dataset. We can only download the div2k dataset by commenting the script from MS COCO in the .sh file and after saving it, run it as follows.

The next two imports are for the encoder and decoder architecture. Basically, there are three models for each, namely Basic, Residual and Dense. And currently, the implementation part supports the basic and dense architecture.

The next import concerns the data loader. This function is used to load the dataset from the directory and additionally you set some parameters like number of images to use, blending etc.

Now after downloading the dataset by the above shell command, we can load it using the Data Loader function. The dataset is uploaded by default in two splits and the validation here we will use those two.

Now that’s all, now we can directly use SteganoGAN’s wrapper class to create the architecture as shown below.

In the definition above, we have used the BasicCritic function which is a kind of evaluation function that checks whether a given image is shorthand or not.

Now we can start training. To train this model, it is sufficient to simply call the .fit method as we do with normal ML algorithms by providing the training and validation data.

After completing the training, we can use the encoder and decoder functions. Here, the encoder function is used to take three arguments, namely the input image, the output image name and path, and the string or text message to be transmitted.

Here is the image we are using.

Similarly, the decode function only takes the generated image and outputs the above encoded message.

To go out: Fire in the hole!

And here is the output image.

The encoded image looks like the original image as we can see above. Out of curiosity, we can check the difference between the two images using OpenCV as follows.

Here is the result,

A complete black image means there is absolutely no difference between the images.

Through this article, we have learned about steganography which is basically a technique by which one can transmit some kind of information separately between parties. For image steganography we saw the python based tool called SteganoGAN which can encode the arbitrary message to the image and retrieve it, and in the whole process we cannot see any change in the image .