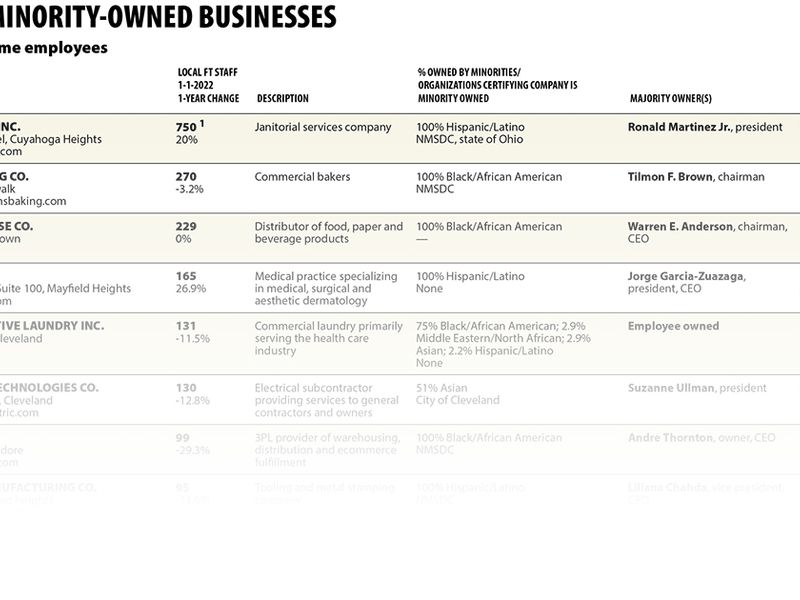 The comprehensive Excel directory includes 173 northeast Ohio-based businesses and organizations, up from 133 last year. For almost all businesses, we’ve also added the names of majority owners and listed all organizations that certify them as minority-owned.

So, we thought it was time to break down who owns what in the directory, but first, a bit of housekeeping: the full directory, which includes even the smallest businesses, will be published in the listings book at the end of 2022, but Crain data members can get the Excel version now. The directory’s 25 largest employers also feature in a ranked list in this week’s print edition.

Now, here are some ownership statistics covering the 165 private sector companies in the directory (which also includes eight nonprofits focused on minority issues).

The total number of Northeast Ohioans employed by directory companies increased by 2.9% if you include Janitorial Services Inc., which has an outsized impact given its size and the fact that it declares full-time equivalent employment (others on the list declare one-time employees only). Without JSI, employment fell by 1.3%.

Of course, the repertoire is by no means complete. Visit bit.ly/fears-minority-owned to submit your business if you haven’t already.