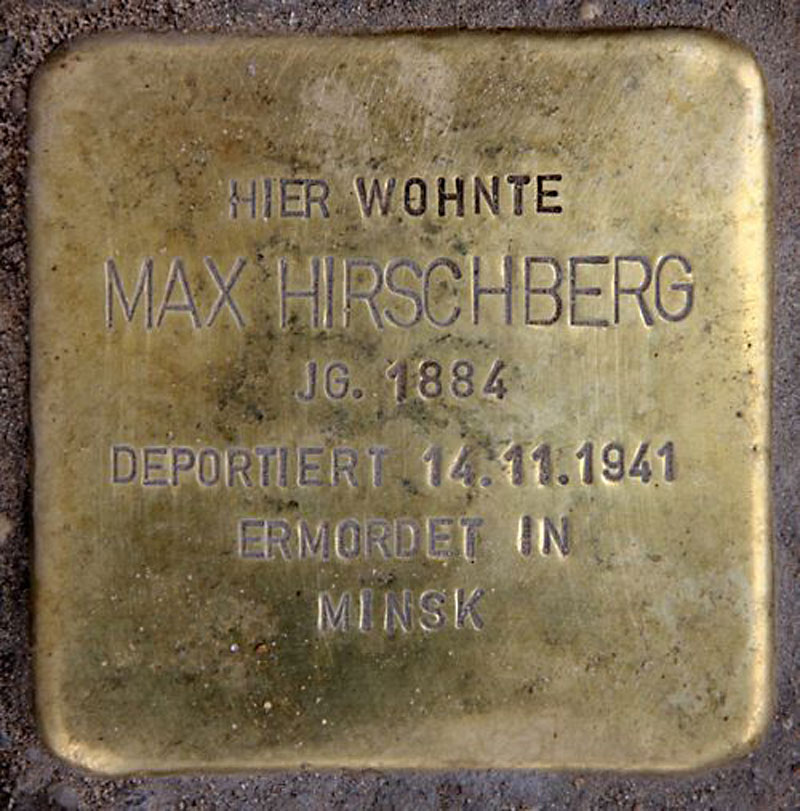 Austin at Large: Neither Slumber Nor Sleep: We’ll be altered, threatened, reviled, even shot. We must not let ourselves be stopped. – New

These are called Stolpersteine ​​- “stumbling blocks” – small brass plaques in the street that serve as daily memorials to addresses in Berlin and throughout Europe where victims of Nazism lived. This one is for my great-grandfather. (Photo by Wikimedia User OTFW (CC BY-SA 3.0))

In the Berlin telephone directory of 1941, my grandfather, a doctor, is listed with a star of David next to his name. (He also had to list his middle name as “Israel”; for women it was “Sarah”.) His own father, also a doctor, is no longer listed, as he was already in Nazi custody; he would die later that year in Minsk. But his mother was born nice – her maiden name was actually Braun – and so according to the laws of Nuremberg, my grandfather was a “Mischling” – which is as insulting as that sounds (“bastard”) – and therefore not yet driven out of the rapidly deteriorating German state. His mother had converted, was kosher, and aligned herself as much as possible with Berlin’s Jewish community, which was not at all very Orthodox and generally considered itself German first. But none of that mattered, because Hitler insisted that the Jews must to be a race in its own right.

My grandfather survived another series of Nazi depredations – being arrested and sent to the Russian front, where doctors were needed – but survived until after the war when the Russians removed all doctors from East Berlin , took them to Sachsenhausen (the nearest concentration camp, which they had turned into their own prison), and told them to stem a raging cholera epidemic. They failed, and he died, and after that my family was no longer Jewish. There are only three of us left; I’ll allude in passing to being of Jewish descent, but I won’t tell that story, because while many find it interesting, others have found it threatening or offensive. Some of them may be reading it now; some of these people could be Nazis themselves, if they felt like it.

I started writing this for my column two weeks ago after the Buffalo calamity, inspired by some “replacement theory” bullshit that is just as cracked and as repugnant and yet as insidious as the Nuremberg Laws. Don’t forget that Hitler sincerely believed in such things; he was also convinced that all-powerful Jews controlled the United States and was shocked that America was going to war, even after Pearl Harbor. We know without a doubt that the “doctrine” of the Buffalo shooter – and the corollary doctrine that all Americans, but in reality themselves, should be armed and dangerous – is at the same time totally unacceptable to believe and to act in a civilized society, and championed by a major American political party and its reactionary media propaganda machine. All that varies is how far Fox News Nation members, with what power they have, are willing to go to act on what they believe. If they really don’t believe in it and are just riding the train to get to political power faster, they run out of time to jump before it derails.

People think that I have too much faith in the darkness that awaits us, that there is simply no longer any way to see a way out into the light. One of the reasons for this is that I also try to act on my beliefs, which include the existence of a loving and providential God, which means that hope is not optional. But on the secular level of the news of the week, rather than saying I’m hopeful, I want you to know more that I see this as an opportunity. This is because while people aligned on the wrong side of history, justice, and truth can project awesome power, they are actually very weak, stupid, corrupt, decadent, and soft. That’s why they want to rig the rules to keep themselves in power and take the power away from you.

It vexes me more every day when I hear the Democratic message machine – which is so much less effective than its fascist counterpart as we control the White House and Congress – making noises about “authoritarianism” or even “protection of our democracy”. This is not a political science course; our lives are at stake, literally. It’s about the fascists trying to steal what’s rightfully yours, take the power they haven’t earned, control your body and punish your mind, all because they truly believe what you ‘they see on TV and read on their social media, which is the only engagement they have with life beyond themselves, and which is designed to make them angry and scared about your very existence. But they are still lame, stupid and weak. There’s a limit to the damage they can do unless we let them run wild unopposed.

We shouldn’t do that.

For the youngest and therefore weakest members of the fascist class – the perpetrators of so many massacres between the ages of 18 and 20 – the only way to redeem their internet-poisoned, racist and incel lives is with an AR-15. We don’t know much about the Uvalde shooter, but we do know that he scared young women on Instagram and made no secret of his desire for guns. He may not have regurgitated a manifesto of 4chan memes and Tucker Carlson scripts before turning an elementary school into a killing field worthy of Sachsenhausen. But we know he should have been watched more closely and not trusted with deadly force.

The title of this column is taken from Psalm 121:4 and 6-7: “Behold, he who guards Israel shall neither slumber nor sleep… / The sun shall not strike you by day, nor the moon by night / The Lord keep you from all evil, he will keep your life.” In my faith, this loving and providential God is in all things and therefore in each one of us, and thus we have the strength not to fall asleep nor to fall asleep for protect each other from all harm.Irish Catholic Beto O’Rourke believes similar things about God, but not his church, and his testimony before Greg Abbott and Dan Patrick in Uvalde on Wednesday is both politically intelligent and morally appropriate Notice how the people on the other side, who think they speak for all Christians and have a monopoly on God’s love, screamed and screamed like little kittens spawned by Satan when O’Rourke s showed up and called ’em for their shit. If he and we all keep doing it e by November, our future will be less bleak.

Do you have something to say ? The the Chronicle welcomes opinion pieces on any topic from the community. Submit yours now at austinchronicle.com/opinion.