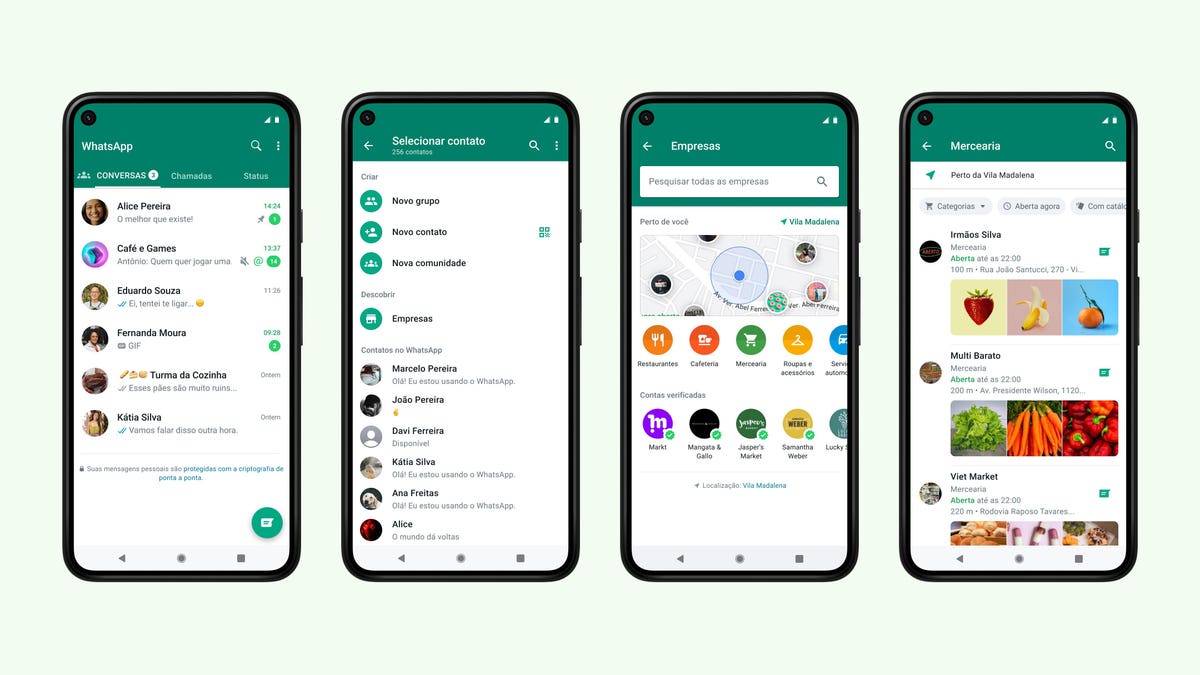 With the aim of further reinforcing dependence on WhatsApp in one of its largest markets, the Metalaunched new features in Brazil to allow consumers to find, communicate and transact with businesses, all within the messaging app.

Features include a directory function, which was tested with small and medium enterprises (SMEs) for a year in São Paulo. As part of the changes announced by the company today (17), users can find not only SMBs nationwide, but also larger businesses using the WhatsApp API nearby through an integrated search function to the application.

Brazil is the first country in the world where the company is introducing the feature, which will gradually be rolled out to other markets. “We want to empower people to do even more on WhatsApp and part of that means creating better ways to engage with businesses,” Meta CEO Mark Zuckerberg said in a recorded message played during the first WhatsApp business summit in São Paulo today (17).

With the new features, Brazilian users of the messaging tool will also be able to view products and initiate conversations with sellers. In partnership with local acquirers such as Cielo and Mercado Pago, WhatsApp is also expected to allow consumers to purchase from businesses within the app.

Brazil is estimated to have around 165 million WhatsApp users, according to an Opinion Box/Mobile Time study, as of August 2022. The messaging tool is installed in 99% of smartphones, and that’s the most used app in the country.

Also according to research, 80% of WhatsApp users interact with brands and businesses through the app and 82% do so to request information about products and services. In addition, around 60% of the most important brands in Brazil are on WhatsApp, according to a study by Kantar.

The company’s launches also respond to local market trends in omnichannel commerce. For example, data from Kantar suggests that 85% of online adults in Brazil feel more connected to brands when they can send direct messages to that company.

Many local businesses are reaping the benefits of adding messaging to their customer service strategy. During the event, different case studies were discussed, namely Bank of Brazilone of the largest banks in Brazil, which offers more than 20 types of services to its 12 million customers via WhatsApp and uses it for service messages, marketing and for transactional purposes.

According to the vice president of messaging at Meta, Matthew Idema, the way Brazilian companies are using the tool is “very creative”. “Since my first visit to Brazil in 2017, I’ve found it remarkable how many small businesses were using WhatsApp to sell products, but in an unstructured way. So we wanted to make it easier for people in businesses,” he said. -he declares. .

Without specifying what revenue boost Meta expects from new conversational commerce features aimed at SMBs, Idema said the strategy is to launch free products and scale them, then bring paid services later. “At this point, we are just at the very beginning, just allowing people to find a business on WhatsApp without any friction,” he noted.

Premium services for SMBs on the horizon include distributing the ability to respond to conversations across up to 10 devices – currently it’s only possible for a small business to respond to WhatsApp requests from a single device. “Our vision is for Whatsapp to be the primary means of communication for people in businesses,” Idema said.

By concentrating business discovery, conversations and transactions on a single platform, WhatsApp aims to solve the customer experience challenges faced by small businesses, as shoppers need to use various services before closing an online sale, a said Guilherme Horn, head of WhatsApp in Brazil.

“Companies lose sales every time a user has to leave WhatsApp to do something. [other than buying]. Our goal is to prevent this from happening – and in doing so, we will generate a massive impact on the Brazilian economy,” he concluded.